Congratulations to  Victoria Tachinski on being named the Manitoba Chicken Junior Female Athlete of the Year.

Congratulations to Dennita Cameron on being named the Female Aboriginal Athlete of the Year. Dennita is from Thompson. 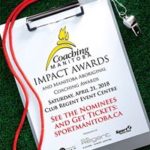 In a morning filled with stories of leadership, dedication, and outstanding service, the 2018 Coaching Manitoba Impact Awards presented by Club Regent Casino and Event Centre honoured the contributions and achievements of some of the very best in the Manitoba coaching community. This annual event celebrates Manitoba’s best coaches and acknowledges the outstanding contributions they have made to their athletes and sport over a number of years.

The winner of the Peter Williamson Memorial Award (Train to Compete/Train to Win Category) was Alex Gardiner.  Congratulations Alex.

.
.
Alanna Boudreau was also nominated for this award.
2019 Restart WordPress Theme made by themeperfect.